The article below tries to explain, in easy to understand terms, the basics of NTRU, starting from a brief explanation of what the lattice is. Future articles will introduce a more detailed view of a modern approach to building NTRU-based cryptosystems.

The lattice and related hard-problems

The picture below visualizes a lattice as points in a two-dimensional space. A lattice is defined by the origin \(O\) and base vectors \(\{b_1,b_2\}\). Every point on the lattice is represented as a linear combination of the base vectors, for example \(V=−2b_1+b_2\). 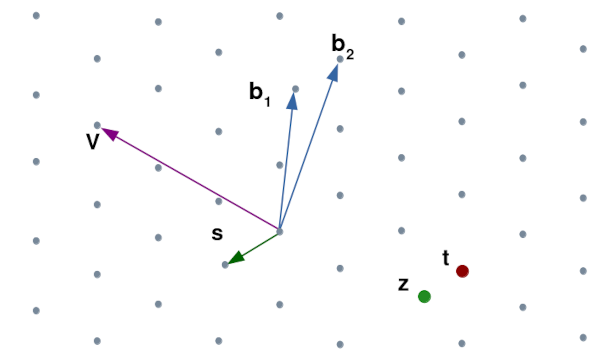 There are two classical NP-hard problems in lattice-based cryptography:

In the graph above, solving SVP and CVP would be quite simple. However, the lattices used in cryptography have higher dimensions, say above 1000, as well as non-orthogonal vector basis. It is believed that in these instances, the problems are hard enough to solve, even for future quantum computers.

Coppersmith and Shamir, proved in “Lattice Attacks on NTRU” (EUROCRYPT'97) that NTRU problem, can be reduced to SVP.

NTRU operates in a ring of polynomials of degree \(N\). The degree of a polynomial is the highest exponent of its variable. For example, \(x^7+6x^3+11x^2\) has degree of 7. One can add polynomials in the ring in the usual way, by simply adding theirs coefficients modulo some integer. In NTRU this integer is called as \(q\). Polynomials can also be multiplied (obviously), and the result of a multiplication is always a polynomial of degree less than \(N\). It basically means that exponents of the resulting polynomial are added to modulo \(N\). For example:

To instantiate the NTRU cryptosystem, the following domain parameters must be chosen:

First, we generate a pair of public and private keys. To do that, two polynomials \(f\) and \(g\) are chosen from the ring in a way that their randomly generated coefficients are much smaller than \(q\). Then key generation computes two inverses of the polynomial:

It might be the case that after choosing \(f\), the inverses modulo \(p\) and \(q\) do not exist. In this case, the algorithm has to start from the beginning and generate another \(f\). That’s unfortunate because calculating the inverse of a polynomial is a costly operation. The recent instantiations of some NTRU schemes (like NTRU-HRSS) are design in a way to ensure those inverses always exist. Which makes key generation faster and more reliable.

The encryption of a message \(m\) proceeds as follows. First, the message \(m\) is converted to a ring element \(pt\) (there exists an algorithm for performing this conversion in both directions). During encryption, NTRU randomly chooses one polynomial \(b\) called \(blinder\). The goal of the blinder is to generate different ciphertexts per encryption. Thus, the ciphertext \(ct\) is obtained as:

Taking all that was described above, evaluation done during decryption is something like:

The underlying hard assumption is that given two polynomials: \(f\) and \(g\) whose coefficients are short compared to the modulus \(q\), it is difficult to distinguish \(pk={f \over g}\) from a random element in the ring. It means that it’s hard to find \(f\) and \(g\) given only public key \(pk\).

The original scheme has a long (over 20 years) history. Since then it has been changed multiple times, as a response to account for cryptanalytic advances. Several variants of concrete KEM and signature schemes based on NTRU were proposed during NIST PQC standardization. In the case of KEM, two candidates NTRUEncrypt and NTRU-HRSS-KEM been merged together and end up as a scheme called … well, “NTRU”. The scheme is fairly easy to implement in constant-time with is characterized by performance, allowing it to be used in the production environment. The NTRU-based signature scheme Falcon also came to the last round of the standardization. It’s characterized by very fast execution and relatively small key sizes. Nevertheless, performance efficient, constant-time implementation can be quite complicated. It also seems, patent situation for NTRU schemes is much clearer than in case of other candidates.